Utility: is simply defined as the total amount of satisfaction one derives from the consumption of a commodity at a particular time. For example, the utility of smoking Indian hemp and drinking of beer is the satisfaction one (i.e. the person) derives from consuming such a commodity at that particular time. Note that the total utility rises up to a point as one acquire more and more of the same commodity. 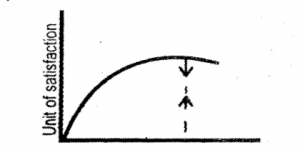 TOTAL UTILITY: This is referred to as the entire amount of satisfaction obtained from consuming various quantities of a commodity. As earlier said, total utility increases as quantity increases.

AVERAGE UTILITY: This is derived by dividing total utility by the amount of commodities consumed.

The law of diminishing marginal utility state that the satisfaction derived from the consumption of a good or service (i.e. utility) tends to diminish (fall) progressively as additional units of that commodity is consumed by the consumer. In other words, as a consumer increases his consumption of a commodity, the marginal utility derived from consuming the commodity falls, even though the total utility may be rising.

For instance, assuming the table above is that of a man who has just finished a race (say 100 meter) and he is very thirsty and was offered a bottle of cold water, the total utility (satisfaction) he derived from that one bottle is 40 units. Being that he was very thirsty, he was offered the second bottle, the satisfaction derived from it was greater again i.e. the total utility became 100 units which means the marginal utility has set in.

By the time, the man was offered the third bottle, he was already looking down and feeling satisfied, ipso-facto, you would discover that the marginal utility, which was rising before, has diminished or decreased from 60 units to 25 units. Hence, the law of diminishing returns as in the theory of production has set in.

This is a situation where a consumer plans on how to spend his limited resources (income) so as to obtain highest possible satisfaction. The consumer does this with the view to maximizing utility.