By demand, we mean the amount or quantity of commodity service that consumers are willing and ready to purchase at a given price and at a particular period of time. It should be borne in mind that demand differs from “want” in that the former is usually backed up by the ability and readiness to pay. It is called purchasing power in Economics. There are two types of demand namely Individual demand and Market or Aggregate demand.

This law states that the lower the price of a commodity the greater the quantity of it to be demanded. “Ceteris paribus”

Let us take the individual demand schedule for illustration. Assuming the price of Vitalo tea (a tin) is N100.00 for low- income earners there is the tendency to buy more than when a tin costs about N200.00.

The table below shows the illustration graphically. Individual Demand Schedule: This is a table that shows the quantity of goods demanded at various prices. 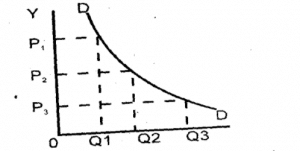 From the above graph, we understand that at each of the prices, P1, P2 and P3, the quantities Q1, Q2 and Q3 are demanded respectively. Other factors that can influence the quantities of goods demanded apart from price are:

EXPANSION OR CONTRACTION OF DEMAND

By expansion or contraction of demand, we mean the movement or shift in the locus of demand curve. This implies that at the old price, different quantity was demanded showing that there is no change in price. 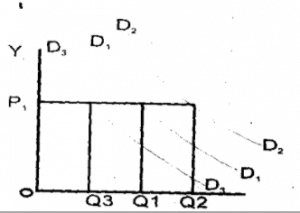